Last week, we posted about five French scientists who made important discoveries and adavances. 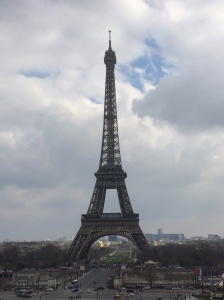 Last week, we were standing under the Eiffel Tower, on which the names of 72 French scientists and engineers are engraved. These names are engraved around the first level, which makes them easy to read from ground level. Each side boasts 18 names. None are names of women. Yesterday marked the anniversary of the opening of the Eiffel Tower to the public in 1889 (you may have seen yesterday’s Google doodle). It remained the world’s tallest man-made structure until 1930, when the Chrysler Building in New York was completed. 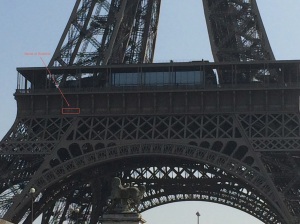 Interestingly, when Anna last saw the Eiffel Tower, the names had been painted over. But now, they shine in gold in the Paris sunlight. Actually, there wasn’t all that much sunlight, but the names still shone. We walked down from the Trocadéro, so we first caught sight of the North West side of the Eiffel Tower: Seguin, Lalande, Tresca, Poncelet, Bresse, Lagrange, Bélanger, Cuvier, Laplace, Dulong, Chasles, Lavoisier, Ampere, Chevreul, Flachat, Navier, Legendre, Chaptal.

One of the more well-known of these men is Pierre-Simon Laplace (1749-1827), a mathematician and astronomer. He formulated the partial differential equation that is named for him. The French like to think of him as their very own Newton, and, like Newton, Laplace investigated the mathematical underpinnings of our relatively, but not completely, stable Solar System. He also toyed with the idea of a black hole. Laplace also collaborated with Antoine Lavoisier (1743-1794), who was primarily a chemist. Lavoisier gets credit for understanding that combustion requires oxygen, and, in fact, he gave us the concepts and names of oxygen and hydrogen. He discovered that a given amount of matter will retain the same mass, even when it changes shape. This concept is now so well engrained in our understanding of the world around us that we take it for granted. During the French Revolution, Lavoisier was caught up in a host of accusations and was guillotined. We also want to mention Cuvier. The word refers to the building in a chateau where wine is made. The scientist’s first name was Georges (1769-1832), and he was a naturalist especially interested in anatomy. His work in anatomy, in fact, underpins the whole field of paleontology. He ascertained, for instance, that some large bones in the United States came from an extinct animal that he called a mastodon. Before Cuvier, extinction wasn’t considered a fact, but he made a good enough case that we take that idea for granted as well. As invested as he was in understanding the similarities and differences in anatomy across species, he was not keen on the theory of evolution.

Lagrange is also the name of a winery in France, and the red wine produced there is named for it in the official classification for French wines. Joseph-Louis Lagrange (1736-1813) was a mathematician. He worked with the calculus of variations and differential equations. He tackled the three-body problem. Lagrangian points are named for him and refer to the point between two bodies where a third body can sit in a stable position, based on the two bodies’ gravitational pull. Scientist Neil deGrasse Tyson and others have suggested we can use these balance points to hangout in space and build things; Tyson called them “destinations” like the Moon and Mars.

As our fifth scientist in this post, we turn to Marie-Sophie Germain (1776-1831), a woman whose name doesn’t appear on the Eiffel Tower, though some have argued she belongs there because some of her work allowed such a structure to be built. Germain was a mathematician and a physicist, and she corresponded with some of the leading male scientists of her time. She struggled to piece together an education and become a working scientist because she was a woman. Despite this inadequate background and support, she dove into areas such as number theory, elasticity, and Fermat’s Last Theorem. She tried and tried again, eventually winning a prize from the Paris Academy of Sciences for her paper on elasticity. But she couldn’t attend the Academy’s meetings for several more years because wives of members were the only women allowed. She died of breast cancer. The Academy of Sciences in Paris now gives a prize in her name. CELEBRATE SOPHIE GERMAIN’S BIRTHDAY TODAY!