The events of the December 2014 Orion/EFT-1 NASA Social were jointly sponsored or hosted by the NASA social media and outreach teams from the Jet Propulsion Laboratory (JPL) and the Armstrong Flight Research Center. To begin this final post about that event, the Lofty Duo would like to say a big Thank You to the wonderful folks who make these events happen.

Here’s are our live links to our previous posts about this day:

The afternoon session included a chance to tour the grounds and see some of the activities going on at JPL. We started our walk with a trip to Building 180, which serves as JPL’s primary administration building, or HQ. The purpose of the visit was two-fold: first, it allowed us to get out of the rain—it was a wet day that came at the end of the one of the wettest weeks we’d had in California in a long time—on our walk to the Space Flight Operations Facility (SFOF); and second, it was an excellent opportunity to see a life-size model of the Mars Size Laboratory, better known as Curiosity.

Although the descriptions of the Curiosity lander give a sense of the scale of the device—it’s often been described as landing a Mini Cooper on Mars—it isn’t until you’re standing next to a model of thing that you really appreciate the scope of the effort required to put this sizeable lander on Mars. The ChemCam (the laser-firing chemistry analytics instrument) and Mastcam (responsible for color images and video) devices sit on top of a telescoping mount at the front of the rover. 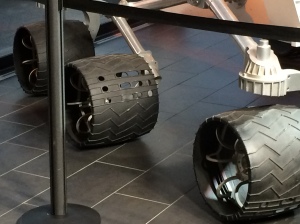 It was fascinating to get an up-close look at Curiosity’s wheels for the first time. The wheels, machined from solid blocks of aluminum, have been much in the space news lately. First, in late 2013, it was revealed that the wheels were suffering significant damage at the hands of the rocky Martian surface. Emily Lakdawalla of the Planetary Society has a couple of posts about the problem; click HERE for one. (http://www.planetary.org/blogs/emily-lakdawalla/2014/08190630-curiosity-wheel-damage.html). The JPL folks seem to have worked out ways to manage the damage. The rover’s wheels were also intentionally designed with some holes in them. In fact, there is a sequence of three sets of three holes each that spell out J P L in Morse code as Curiosity rolls across the Martian surface (see HERE for more info).

Near the model of Curiosity was a fascinating data visualization display, a delightful blend of art and science. Comprised of a couple of dozen tubes containing light strings, the visualization was demonstrates the communication streams that occur between JPL and the deep space missions it manages. Each light string represents a communication path between Earth and a single deep spacecraft. As communications come in from the spacecraft, the string lights up in a manner that conveys the length of the communication and the amount of information being sent down from the spacecraft. It was mesmerizing, and Doug could have spent the entire afternoon watching the showers of light that were trickles of information.

After Building 180, the tour group headed for the SFOF. Lofty Ambitions has already covered the SFOF in another post, and so we’ll move on here.

Jennifer Trosper, MSL Deputy Project Director, welcomed the group into the In-Situ Instrument Laboratory. Located in JPL’s Building 317, this lab serves as a proving ground for Mars-bound instrumentation. Earlier in Trosper’s career, she served as the Mission Manager for another Mars rover, Spirit. She recounted that the oft-cited ninety-day mission life for Spirit and Opportunity was derived from calculations based on the Mars surface dust accumulation rate on the solar panels of the earlier Sojourner Mars rover. Arriving at Mars on U.S. Independence Day in 1997, Sojourner also had a very conservative mission length estimate: a seven-day mission that could be extended to thirty days. In the end, like Spirit and Opportunity, this turned out to be wildly conservative. Sojourner lasted for eighty-three sols (Mars solar days), or about eighty-five Earth days.

After recounting the remarkable successes of Spirit and Opportunity, Trosper talked about upcoming Mars missions including Mars Insight. Befitting the lab’s use as a test-environment for instruments headed for Mars, Trosper also mentioned the MOXIE instrument. MOXIE will fly to Mars on the planned 2020 mission. Once there, MOXIE will be used to test the feasibility of creating oxygen from the Martian atmosphere. MOXIE is often described as a fuel cell run in reverse. It will take in CO2 from the Martian atmosphere, where the compound makes up 96% of the atmosphere, and will output oxygen and carbon monoxide.

We finished our tour of the JPL campus with a stop at Spacecraft Assembly Facility and a visit with researcher Ian Clark. Clark is the Low-Density Supersonic Demonstrators (LDSD) principal investigator. We’ve already covered the LDSD program during our write-up of JPL’s 2014 Open House, but it was wonderful to be able to see these test articles in the flesh. They are being refurbished and reengineered in preparation for more testing.

The tension and excitement of the Orion EFT-1 pre-launch activities were palpable during the December 3rd NASA Social at JPL. As ever, the Lofty Duo came away impressed by the amazing array of activities that NASA Armstrong and JPL are carrying out in service to our nation’s space exploration programs. We hope that our six-part write-up of the day conveyed our sense of wonder at NASA’s far-reaching programs.