It was an unusually busy spring for the Lofty Duo. Doug was the conference coordinator for Intertwingled: The Work and Influence of Ted Nelson, and Anna took on a new book project while still trying to work on her book about the history of the space program. Our transition into a summer schedule was abrupt, and it’s caused us some reflection.

One of the things that we just realized is that this week marks the fourth anniversary of Lofty Ambitions. We actually wrote a prologue post on June 30, 2010, to map out our basic plan for Lofty Ambitions. In that post, we announced that the blog would begin formally on July 1, 2010—so it did.

If you look at the blog’s tag cloud on the right-hand side of the page, you’ll see that Beer appears as one of the most common tags in our blog, so we’ll be tipping a pint tonight with Anna’s sister, Brigid, and their Aunt Maggie in celebration of four years of consistent publication.

One of the primary reasons that we started this blog, besides our mutual love of aviation and writing, was to document the end of the Space Shuttle program. Many years ago, after we’d done some academic writing about aviation museums, we talked about collaborating on a book that would highlight three aircraft from different eras of the twentieth century. We’d missed out on any opportunities to be connected to the first two aircraft by virtue of our mid-1960’s births. But the shuttle was the last of those three aircraft. Yes, we know that the shuttle is also a spacecraft, but it looks the way it does and landed the way it did because, underneath it all, it’s an airplane. In 2010, we wanted to get close to it before it was gone.

We got closer that we ever could have hoped. This blog and our university magazine helped us garner press credentials to witness two of the last three shuttle launches, and we documented those experience through this blog, magazine articles, and newspaper stories. By putting our experiences out in front of the world, we also inadvertently became people that you could contact when you had a question about NASA or the shuttle. We both agree that the things of which we are most proud are the questions that we’ve answered and the connections we’ve made because people have read the blog and wanted to know more. Along the way, we’ve answered questions about the height of astronauts, helped two fifth-graders win first place in a statewide history contest, and been told by the astronauts who were there that we got the facts right.

In the last four years, we’ve managed to post every single Wednesday. We’ve come right up against the deadline on a few occasions, but we’ve managed to get something out every week. Our blog stats reveal that this is our 421st post. If you’re quick with the arithmetic, you’ll realize that’s significantly more posts than four years worth of Wednesdays. Often when we go to a big event—like a rocket launch—we publish every day that we’re on site.

We also use a rough average of a thousand words per post. A little more arithmetic will tell you that that comes to 421,000 words (more or less).

One of the missions of the blog is to discuss writing-as-a-couple. We are happy to report that being responsible together for producing a blog post every Wednesday has been great for us in terms of our writing and our coupledom. We’ve thoroughly enjoyed the ability to collaborate and engage with each other as writers.

In the past year, we’ve recorded a number of our activities as multi-post series. LaunchPad is a wonderful opportunity for writers to learn more science, specifically astronomy & cosmology. A Writing Residency details the two separate stays we had at Dorland Mountain Arts Colony; we plan to get back there again in this next year. Palomar Observatory & George Hale is an extensive look at the life of George Ellery Hale and one of the observatories that he built; we’re trying to figure out how to visit another of his visions soon. And JPL & EarthNow is one of the wonderful NASASocial programs that we were selected to attend. We’ve also written about losing friends to cancer, and Anna’s new book project has something to do with that. 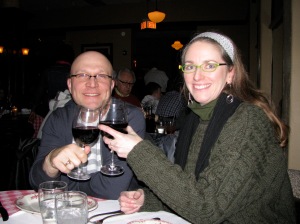 Last year’s posts, both those that are a part of a series and those that stand alone, have served to remind us of how many things are going on in the areas of interest to Lofty Ambitions: Aviation and Space Exploration, Science, and Writing as a Couple.

The vagaries of our schedules and rocket launches are such that we haven’t been to a launch in this past year, though we’ve happily watched blog posts, Facebook status updates, and tweets as a number of the friends that we’ve made via this blog have been to launches. We meant to go to the SpaceX-3 Commercial Resupply Services flight launch, but it was delayed in March (when we could go) and wound up be launched in April (when we couldn’t go). We’ve both agreed that we need to go see a launch in the near future, and we’re keeping our eyes on the two SpaceX Falcon Heavy launches planned for 2015.

As always, we continue to be grateful that we’re able to write about the things that we love to do, about which we want to learn more. At the same time, we’re always on the lookout for new challenges, new opportunities. It’s been a wonderful four years, and we are already planning for the next four. Keep reading!