When Anna’s mother was diagnosed with pancreatic cancer in March 2012, we were upset. But we weren’t shocked. Age increases a person’s risk of cancer. Though in otherwise good health, she was in her seventies. She lived pretty much exactly as long as Centers for Disease Control statistics estimate for someone born when she was.

Statistics are tricky, though. At birth, a white woman born in the United States in 1950 has a life expectancy of 72.2 years. But if she survives to reach the age of 65 in 2005, her life expectancy is 19.6 years. In other words, the numbers suggest that the longer you live, the longer you’re likely to live. 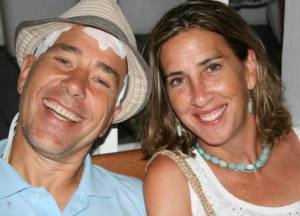 When our college friend Adam was diagnosed with brain cancer less than two years ago, we were upset and shocked. A white man born in 1970 (the closest year to his birth listed) has a life expectancy of 71.7 years. Our friend has a wife and two kids in school and should have more than twenty more years ahead of him. And if he were to survive those twenty more years, nearing seventy, he’d likely live another twenty after that. But he probably won’t survive to the end of this year because these seemingly objective numbers grow out of heartbreaking stories of being felled too early as well as those of longevity.

Why does a person get cancer? We like to think that such a devastating change in the body has a direct cause or, at least, that it’s a matter of some critical mass of risk factors. In his new book The Cancer Chronicles, George Johnson (with whom Doug worked at the Santa Fe Science Writing Workshop) points out, “Everyone has risk factors for almost every cancer, and they take on significance only in retrospect.” We understand that one friend’s mother developed lung cancer as a result of decades of smoking, even though we know smokers who didn’t develop lung cancer and a non-smoker friend-of-a-friend who did.

From The Cancer Chronicles:

With so many checks and balances, a person must be extraordinarily unlucky to get cancer. Then again, with so many things that can go wrong, it is amazing that cancer doesn’t happen all the time.

Given a large enough group of people, we can predict what percentage of them will be stricken but we cannot know who they will be. […] With enough information—demographic, geographic, behavioral, dietary—we can narrow the pool of those at risk for certain cancers. […] But there is only so far we can go. Whether any one person gets cancer or does not will always remain mostly random.

Glioblastoma, the relatively rare type of cancer our friend has, comes with an incredibly discouraging prognosis. The American Brain Tumor Association—and our friend’s doctor—suggests that a patient who undergoes standard treatment of surgery, radiation, and chemotherapy can live two years after diagnosis. Without treatment, the prognosis is just a few months. But as many as 30% of glioblastoma patients beat that two-year mark, and perhaps 4% make it to that arbitrary, seemingly important five-year hurdle. (We’ve written about the similar low incidence but lousy prognosis for pancreatic cancer.)

What makes the difference in survival? Youth helps. A younger person is less likely to develop glioblastoma in the first place. A younger person is more likely to survive longer once diagnosed. Successful surgery helps too. If at least 98% of the brain tumor is removed, that person is more likely to live longer. Still, just as we cannot predict exactly who will develop which cancer, we cannot predict who will be that one-in-twenty-five so-called miracle.

In addition, glioblastoma, like pancreatic cancer, is rarely caught early. Symptoms often don’t emerge until the tumor is large, and the size of the tumor is an important factor in determining the stage of the cancer and, by extension, the prognosis. For the deadliest cancers, early diagnosis may matter most in surviving even a few years, but early diagnosis in these cancers may also be less likely. Symptoms like nausea and headache may be racked up to other health problems, or by the time glioblastoma causes a seizure, the cancer may be well advanced. The five-year survival rate for someone diagnosed with the later stages of glioblastoma is pretty much zero.

That’s what our friend and his family face now, the otherwise that they consciously held off for the past couple of years.

From “Otherwise” by Jane Kenyon, who died of leukemia at age of 47:

I slept in a bed
in a room with paintings
on the walls, and
planned another day
just like this day.
But one day, I know,
it will be otherwise.

If you would like to make a donation to help with the expenses that our friend and his family are facing, you can go to his Give Forward page.