Poet Kristin LaTour tagged us for The Next Big Thing that’s going around the blogosphere. Here, we take on the ten questions that series poses.

What is your working title of your book?

We were born into the Apollo era, and Doug’s earliest memory is of watching the Moon landing. We came of age in the shadow of the space shuttle. As we followed the end of the shuttle program over the last couple of years, we realized that there’s a big swath—those born between the Soviet launch of Sputnik in 1957 and the first shuttle launch in 1981—that is Generation Space. When Neil Armstrong died last year, this space generation became the adults of this world.

Where did the idea come from for the book? 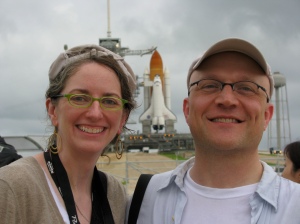 We started writing together in 2004, when we presented a paper about how aviation museums represented World War II. We sent in an abstract because we wanted to visit Amsterdam together, but after the conference, we published an essay version of our paper in an edited collection and kept writing together.

In 2008, we moved to Southern California for new jobs. As we packed our belongings, we started talking about how this move might be an opportunity for us because this area has a long tradition in aviation. We started Lofty Ambitions blog in 2010, in part to write about the aviation and spaceflight history that surrounded us. Generation Space is a natural outcome of our years together.

What genre does your book fall under?

Which actors would you choose to play your characters in a movie rendition?

When we started following the end of the space shuttle program in the fall of 2010, we didn’t expect to meet actors. But it turns out that a lot of Americans from all walks of life are interested in space exploration. Seth Green of The Family Guy was at a #NASAtweetup for a shuttle launch, and we met Luke Wilson last time we were at Kennedy Space Center (KSC). We sat behind June Lockhart of Lost in Space at the title transfer of Endeavour here in California and saw Nichelle Nichols of Star Trek there too. And we’ve seen celebs of other sorts at KSC, like Anderson Cooper, John Oliver, and Neil deGrasse Tyson.

As for who would play us, that’s hard to imagine. Maybe Stana Katic and Nathan Fillion, who currently star together in Castle. The two characters have different styles but work well together, collaborating on crime solving and, to a certain extent, novel writing. Katic has dark hair and pale skin like Anna, and we have a friend who’s met Katic’s brother. Of course, Fillion knows how to do space from Firefly and Serenity, and we’ve been watching him since Two Guys, a Girl and a Pizza Place. Maybe our book could even be adapted for an episode of Castle, with someone attacked by one of the alligators that lives in the ditch near the launch pad at KSC—only, Richard Castle knows it’s murder.

Mostly, if we somehow get a movie deal for Generation Space, we probably won’t care who plays us, though Doug would veto Michael Chiklis.

What is the one-sentence synopsis of your book?

Star Trek‘s Enterprise set out on a five-year mission to boldly go where no man has gone before, but NASA has gone boldly for fifty years and counting—Generation Space figures out what that means for us as a spacefaring nation and for our future.

Okay, we used a dash to get two sentences.

Will your book be self-published or represented by an agency?

We’re represented by Alice Tasman at Jean V. Naggar Literary Agency. We wrote about landing an agent here at Lofty Ambitions. Since then, with Alice’s suggestions in mind, we’ve revised our book proposal.

How long did it take you to write the first draft of your manuscript?

We’ll let you know when we’re finished. We started drafting in earnest about a year ago at a two-week residency at Ragdale, and we have roughly half the book in really good shape and the rest mapped out.

Of course, we researched and wrote blog posts over two years, before we started drafting as a book. While we can’t merely cut and paste blog posts, a blog-to-book project means that we generated a lot of ideas and material that we can now use as we draft chapters. We’ve reorganized our thinking to form a table of contents that makes sense for Generation Space, and we’re distilling and expanding from blog posts to form chapter outlines. We end up re-drafting, then we revise and revise and revise.

What other books would you compare this story to within your genre?

In some ways, our book works like Kristen Iversen’s Full Body Burden. She tackles nuclear weapons manufacturing, so the topic is different. But, like Iverson, we’re covering a blend of science and history and including personal experience. Another book with that sort of balance is Sandra Beasley’s Don’t Kill the Birthday Girl!, which is a personal and scientific investigation of allergies, or Tom Zoellner’s Uranium, which investigates all things—discovery, mining, uses, misuses—uranium. In all these science books, the author becomes part of the story, a vehicle for understanding the topic. And all three of these authors have contributed guest posts to Lofty Ambitions.

In other ways, our book is immersion journalism, a project book like Cheryl Strayed’s Wild, Alain de Botton’s A Week at the Airport, or Tracy Kidder‘s The Soul of a New Machine. We immerse ourselves in a place we’ve never been before, and we learn—through failure and success—how to be insiders in a particular time and place to understand an aspect of our culture and ourselves. There’s an arc to our story and to the story of U.S. space exploration that we couldn’t convey solely through blog posts.

Who or what inspired you to write this book?

The trigger for following the end of the space shuttle and, ultimately, for writing Generation Space was driving out to the desert—to Edwards Air Force Base—on Thanksgiving weekend in 2008 to see Endeavour land.

By that point, the shuttle program as set to end within a few years, so we started wondering what that meant for us as individuals who grew up with American manned spaceflight as a given and for the country. Within two years, we went to KSC to see a launch. And we kept going and going.

Serendipity played a huge role in keeping us focused on this project. Through one colleague, we met Roger Boisjoly, a whistleblower in the Challenger accident (today—January 28—is the anniversary), and his papers are now archived at our university. Through another colleague, we attended an event celebrating the Ilan Ramon Day School; Ramon died in the Columbia accident, and we saw his wife speak and met astronaut Garrett Reisman, who is now at SpaceX. During our residency at Ragdale, we discovered that Lovell’s Restaurant—as in Apollo astronaut Jim Lovell—was nearby so we ate a delicious meal in the midst of space artifacts. Our friend Leslie Pietrzyk recently sent Albert Goldbarth’s poetry chapbook The End of Space to Anna. Hardly a week goes by when we don’t stumble across something connected to Generation Space. Serendipity is ongoing inspiration.

What else about your book might pique the reader’s interest?

Most books about the space shuttle are really technical and demand a lot of the lay reader or are heavily photographic, without much information or narrative into which you can sink your reading teeth. We’re writing for for strollers as well as for studiers. A reader will learn a lot but find the story accessible. We have a story to tell.

Also, we’re writing in the voice that we developed for Lofty Ambitions. We write as a couple, though it’s clear when a particular experience is Anna’s or something happened specifically to Doug. We don’t know of any other book co-written by a poet and a science librarian; we have fun writing together, and the collaborative voice comes naturally to us now.

8 thoughts on “The Next Big Thing (blog hop)”