We’ve sung the praises of serendipity—that chance occurrence that connects a single, unanticipated event to our larger projects—on a number of occasions (HERE and HERE and HERE). But we’re also big believers in preparation, doing the research, and being ready to take advantage of opportunities as they arise. Our recent trip to the Eighth Annual Jacqueline Cochran Air Show provided just such an opportunity. We’ve already described some of the events that took place at this air show, but the signature moment for us took place shortly after we arrived.

After making our way through the gate, we headed towards the C-17 transport sitting at the southern end of the flight line. Its gigantic wings offered shade from the desert sun, giving us the chance to pull our thoughts together. We then walked the length of the flight line in order to reconnoiter the aircraft, the crowd, and the vendors, a standard tactic to get the lay of the land.

Long before we reached the end of the flight line, we began see occasional flashes of bright, reflected sunlight. This isn’t an uncommon occurrence at air shows. Many WWII-era aircraft are displayed unpainted, finished in their original aluminum skin. But this was different. The reflected light was vibrant, more intense. When we arrived at its source, we saw why: a 1939 Lockheed 12A Electra Junior.

This aircraft’s owner is Les Whittlesey. He spoke with us about the aircraft’s lifespan, gave us a tour of this magnificent piece of aviation history, and showed us various Lockheed ephemera he’s been collecting, often finding something on eBay. (Click here for another article about Les and his plane.)

A product of aviation’s Golden Age in the 1930s, the Electra Junior, so named for its relationship to the larger Lockheed 10 Electra, is a living exemplar of architect Louis Sullivan’s form follows function maxim. Many of the aircraft of the late 1920s and early 1930s were still boxlike structures, covered with fabric, dope, and paint. Recently developed aluminum-based manufacturing techniques gave aeronautical engineers like Kelly Johnson, a native of Ishpeming, Michigan, also Anna’s grandfather’s hometown, the ability to experiment with a new design language which emphasized spare, streamlined shapes. The Electra Junior, a twin-engine, six-passenger plane, was just such a new aircraft shape.

It’s often assumed that the era’s defining architectural and design style, Art Deco, was deeply influenced by the aviation industry and developed its love of curves and shining metal surfaces from the era’s aircraft. In reality, the relationship among aviation, industrial design, and art deco is a more complex, symbiotic one. Art deco had always been a reflection of modernism with its roots in machines and mechanisms. As the ne plus ultra machine of its day, it was only natural that the speed and dynamism of the airplane would influence art deco and that designers steeped in the vernacular of art deco would turn that knowledge back on the flying machine.

Les Whittlesey’s Electra Junior was originally built in 1939 for aviation and automotive magnate Errett Lobban “E. L.” Cord. Cord, as owner of Auburn Automobile Company (in addition to the Stinson Aircraft Company, Lycoming Engines, and several others), was no stranger to futuristic designs. The Auburn Boattail Speedster, designed in the early 1930s by Al Leamy, was an aggressively streamlined shape. Cord took delivery of the Electra Junior in 1940, but he was only able to enjoy it briefly.

In 1941, the U.S. Treasury Department commandeered the aircraft (Cord was paid for it) in preparation for the coming war. The Electra Junior was given the military designation of C-40 and shipped off to England as a part of the Lend-Lease program. As a transport during the war, the aircraft survived a friendly-fire incident over Belgium (the damage was uncovered during its most recent restoration), and there’s a “rumor” (Whittlesey’s word) that Prime Minister Winston Churchill flew in the aircraft. The January 2012 edition of Aviation History contains an article about Churchill learning to fly. Who knows, perhaps Churchill even graced the co-pilot’s seat of this aircraft.

The Electra Junior evokes a different era, one of, as the sales brochure announces, “real comfort when you fly.” In fact, an Electra Junior (and a cutout of one) was used as the Air France aircraft in the penultimate scene in Casablanca (see the video clip below). Although Air France never operated the Lockheed 12A, Hollywood’s artistic license led to the correct choice of style over accuracy in this case.

The Electra Junior’s indisputable style plays a leading role in the Cal Aero Aviation Country Club at Chino Airport, an events venue owned and operated by Les and his wife Susan. During our interview, Les related the fact that aviation-themed country clubs—think standard country club but with runways instead of golf greens—were popular in Southern California in the 1930s. Yes, as we sat in the passenger seats aboard the Electra Junior, we could almost hear the strains of Glenn Miller’s “In the Mood.” 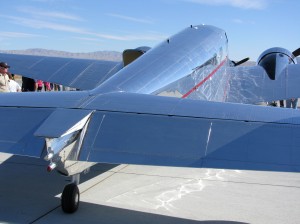 One of this particular aircraft’s greatest achievements was winning the 2006 Grand Champion award at the AirVenture in Oshkosh. It turns out we were there that year, which serves to remind us of a great value of air shows. These events are traveling archives, and each artifact has its own knowledgeable docent. This time, initially attracted by its aesthetic appeal, we grew to understand the story of an Electra Junior.

ALSO SEE OTHER POSTS IN THIS SERIES for more info on the people and the aircraft & lots of photos: Part 1 / Part 2 / Part 3